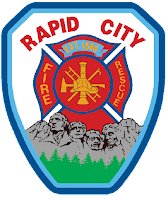 
High School Fire Ops 101 is a program offered by the Rapid City Fire Department to engage high school students by providing them with an up-close opportunity to learn more about our organization and profession. The program is designed to accomplish three main goals:

We will achieve our goals by providing participants with several hands-on and classroom-based activities that cover a broad range of areas including:

Requirements:
Students must be at least 16 years of age on the first day of the program. They must be currently enrolled in a local high-school, in good academic standing, and complete the application process. Students must provide at least one letter of recommendation from a teacher, administrator, or counselor. Students that are selected for the program must have signed parental consent if under the age of 18.

The program will be limited to 12 student-participants and one member of the local media. The Spring 2020 offering of the course will be held on March 20, April 3, and April 17. The class will meet each day at RCFD Station 1, located at 10 Main Street in Downtown Rapid City. The program will begin promptly at 8:30 am each day and will conclude at 4:00 pm. A graduation ceremony will take place on April 17 at 4:30 pm at Rapid City Fire Station 1.

The High School Fire Ops 101 Application can be found below. 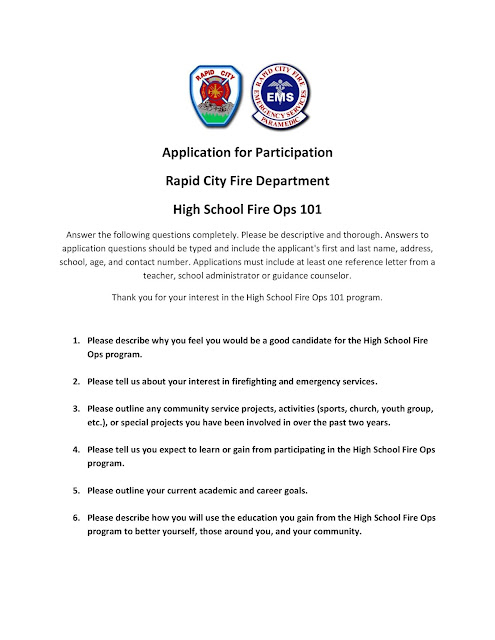 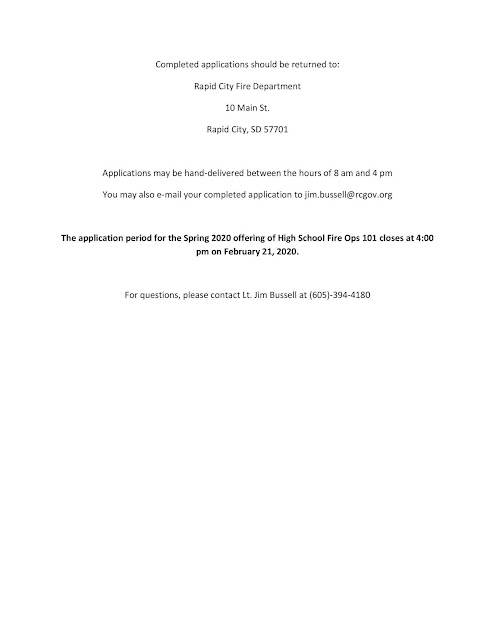 Posted by Rapid City Fire Department at 8:22 AM No comments: 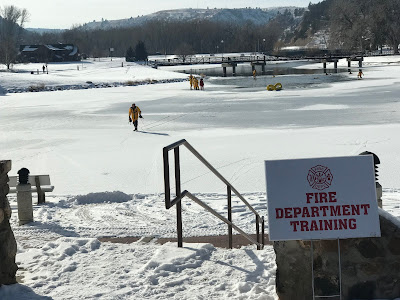 Ice rescue training is conducted annually to ensure that each member of the department has the skills necessary to perform an ice rescue. In December of 2018, firefighters from Stations 1 and 3 rescued two men from the icy waters of Memorial Pond. The rescue was conducted quickly and efficiently which is a direct result of frequent training.

The training will be clearly visible to those in and around Canyon Lake Park. Visitors to the park and motorists nearby should anticipate a large amount of emergency vehicle traffic in the area. The park will remain open during the training. Members of the public are invited to view the training from sidewalk areas nearby but are asked to avoid entering the training area. Signage will be in place to notify park visitors of the training area boundaries.

For questions or comment regarding this advisory, please contact Jim Bussell, Public Information Officer for the Rapid City Fire Department, at 605-394-4180.


Posted by Rapid City Fire Department at 1:43 PM No comments:

Program consists of 1,300 hours in just under 11 months

Once the students complete the program, they will be certified in areas such as Advanced Cardiac Life Support (ACLS), Pediatric Advanced Life Support (PALS), Advanced Medical Life Support (AMLS), and Pre-Hospital Trauma Life Support (PHTLS). Individuals that complete the program and pass the National Registry of Emergency Medical Technicians (NREMT) psychomotor and cognitive exams then must successfully become licensed with the South Dakota Board of Medical and Osteopathic Examiners (SDBMOE) before beginning an intense months-long Paramedic Field Training and Evaluation Program.

The department began providing Paramedic education for RCFD employees in 2016 after it was granted a Letter of Review by the CAAHEP. Since that time, 12 RCFD employees have completed the program with a 100% pass rate.

The course is led by EMS Training Specialist/Paramedic Lt. Jason Reitz. In an August 2019 interview, Lt. Reitz said of the program, “Having a program that can continually meet the demands of the Rapid City Fire Department and the community we serve is so important.” Reitz added that the importance of having quality Paramedics and a solid EMS system is important to both residents of Rapid City and the surrounding area, but to the traveling public as well.

The Rapid City Fire Department continues to see an increase in demand for Emergency Medical Services each year. In 2019 the RCFD responded to over 18,000 calls for service, a new record for the department. Of those calls for service, over 16,000 were EMS related, a 7 percent increase over 2018.

For questions or comments related to this release, please contact Jim Bussell, Public Information Officer for the Rapid City Fire Department, at 605-394-4180.

Posted by Rapid City Fire Department at 6:14 PM No comments:

Rapid City, S.D. – On Sunday morning, firefighters from Stations 1, 3 and 7 responded to 4226 Kateland Street for a report of a structure fire. When crews arrived at the three-story apartment complex just before 10:00 am, firefighters found light smoke with water flowing from an outside deck. The occupant of the home had been cooking on the grill when an uncontrolled cooking fire occurred. The fire activated a sprinkler head on the balcony of the building which extinguished the fire. No damage to the building was reported.

This marks the sixth fire related sprinkler activation in Rapid City in 2019, and the fifth in little more than a month. Four of the activations have occurred in apartment buildings, one in a correctional facility and one in a large commercial occupancy.

To learn more about the importance of fire sprinklers, visit https://bit.ly/2BtPPy5.

For questions or comment related to this release please contact Lt. Jim Bussell, Public Information Officer for the Rapid City Fire Department, at 605-394-4180.


Posted by Rapid City Fire Department at 9:30 AM 4 comments:

No injuries reported, cause under investigation

Rapid City, SD – Just after 7:30 pm this evening, Pennington County 9-1-1 received multiple calls reporting a structure fire at 1515 E. St. Patrick Street. Callers reported flames coming from a mobile home and extending into nearby trees. Crews from Stations 1, 4 and 6 were dispatched as well as officers from the Rapid City Police Department. When Engine 4 arrived on scene, they found a single-wide mobile home that was fully involved in fire. Two vehicles in front of the residence were also on fire with fire threatening residences on either side of the structure of origin.

No injuries to civilians or firefighters were reported. The cause of the fire is under investigation by the Rapid City Fire Department.

Updates to this release are not anticipated at this time. For questions or comment related to this release, please contact Lt. Jim Bussell at 605-394-4180.

Posted by Rapid City Fire Department at 10:14 PM No comments:

Drills, training to be conducted throughout September

Rapid City, S.D. - Beginning at 9:00 am on Wednesday September 11, motorists in the area of East Boulevard and East Kansas City Street will see a heavy Rapid City Fire Department presence as crews will be conducting drills and training evolution's. The evolution's are set to last for the entire month of September and will be conducted in seven separate structures that are slated for demolition sometime this fall.

Firefighters will conduct a number of training evolution's and drills related to fire attack, structural search and rescue, forcible entry, ventilation and firefighter survival. On-duty crews will participate in scheduled drills on September 11, 12 and 13. On-duty crews will also participate in training and drills as their schedule and calls for service allow throughout the remainder of the month. Rapid City Fire Department Recruit Academy 2019-1 will train in the structures late in the month.

Firefighters will utilize a number of different tools and a variety of equipment during the drills and training evolution's. Firefighters will likely be seen wearing full personal protective equipment, including breathing apparatus. A smoke machine will be used to create realistic low-visibility conditions. Live fire will not be used during the drills and training evolution's. Those living nearby or traveling in the area should not be alarmed.

For questions or comment regarding this release please contact Lt. Jim Bussell, Public Information Officer for the Rapid City Fire Department, at 605-394-4180.

Posted by Rapid City Fire Department at 8:24 AM 1 comment:

Eleven Set to Join the Ranks of Rapid City's Bravest

Rapid City, S.D. -  Earlier today we celebrated the beginning of Rapid City Fire Department Recruit Academy 2019-1. A total of 11 employees will be participating in the 12 week academy-style training program that will test the candidates mentally and physically as they prepare to serve the citizens of Rapid City. Seven of the candidates have been working in an EMS only capacity since March of 2019. Four of the recruits have spent the last two weeks in an orientation process that included basic EMS training. The recruits are scheduled to graduate in early November.

The four newest recruits are:

Sheldon Brakke- Sheldon was born and raised in South Dakota. After his high school graduation, Recruit Brakke joined the United States Marine Corps serving for four years in the infantry. His service in the USMC included two deployments. Sheldon joined the South Dakota Army National
Guard in 2012 and currently holds the rank of Sergeant serving with the 842nd Engineer Company. Recruit Brakke has previous emergency services experience as a Trooper with the South Dakota Highway Patrol where he served for nearly five years. Sheldon is engaged with four children. He enjoys outdoors pursuits in his free time.

Matt Heinrich- Matt was born in Fergus Falls, Minnesota before relocating to Rapid City as a child. Working around his family ranch, Recruit Heinrich learned the values of hard work and dedication. It was while working on the ranch that he discovered his love of firefighting. As a member of the Rapid Valley Fire Department, Matt has gained valuable experience. Recruit Heinrich is engaged and has two daughters.

Coleman Quinlivan- Coleman was born and raised in Sioux Falls, South Dakota. After graduating from Lincoln High School, he moved to Casper, Wyoming to attend Casper College and pursue a degree in Fire Science. After graduating with and associates degree, Recruit Quinlivan began his Fire Service career with the Bureau of Land Management in Casper as a seasonal firefighter. Coleman looks forward to a long and successful career with the RCFD.

We wish to welcome and congratulate our four newest members and wish all 11 members of Recruit Academy 2019-1 a successful academy. For questions or comment related to this release, please contact Lt. Jim Bussell, Public Information Officer for the Rapid City Fire Department, at 605-394-4180.

Posted by Rapid City Fire Department at 3:31 PM No comments: